When I run pm2 list prior to downloading and running the linux 2.37.5 (and other versions as well) prometheus on my server everything looks 100% normal with this command output.

After running I noticed weird embedded characters in the output. I have reverted my server several times and run these same steps, and it happens each time in the same way - even with different prometheus versions

Could there be something maliciously embedded in the binary? Has anyone ever seen anything like this. Good prometheus be corrupting something on my system. It’s quite a weird incident.

You can see the question mark looking characters in the output. This only happens when I run prometheus, and really any recent version of it. I tried 3 different release versions. They appear in a few random places in the output, couldn’t capture them all in one screenshot, but they’re always pretty much in the same place after each install. 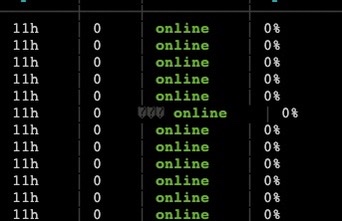